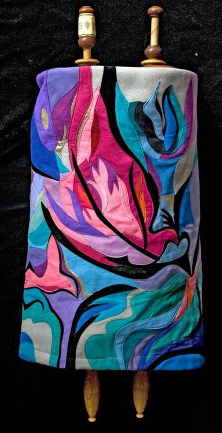 Our Memorial Scroll Torah (MST #508) has been in Sedona since 1991, when Rabbi Albert Plotkin, of Blessed Memory, then Emeritus, of Congregation Beth Israel in Scottsdale, AZ, began his service as our part-time Rabbi for monthly services and holidays. He brought us the scroll, as we were a new congregation. Rabbi Plotkin identified it as a Holocaust Torah originally loaned to Congregation Kol Israel of Scottsdale, which later became Congregation Beth Israel. Harry and Darlene Newman (of blessed memory) gifted funds for the care of the Torah. The mantel was commissioned by Gail Newman in memory of Harry Newman.  The mantel design depicts the Doves of Peace, created and executed by Barbara Ladin Fisher from Atlanta, Georgia.  The binder was embroidered with Stars of David by Dr. Jay and Dee Epstein.

The Scroll has been housed with our congregation ever since; however, as of November, 2015, the Jewish Community of Sedona and the Verde Valley became the legal guardians of this survivor of the Holocaust in Czechoslovakia. Our Torah Scroll is considered an “orphan” Torah, as there is no available information on the exact town from Bohemia and Moravia (now known as the Czech Republic) that was forced to surrender it to the Nazi invaders.

This Torah was one of 1,564 Torahs gathered from synagogues throughout the region by Nazi officials. The Nazis were convinced that they would be able to destroy Judaism, so they gathered religious artifacts and Torah scrolls from the communities they decimated, and stored them in museums in Prague. For a long time it was believed that their goal was to build a museum after World War II ended, showing how the Jews were totally eliminated. While other theories have surfaced as to the reasons for bringing the scrolls to one place, the real reasons will likely remain a mystery.

During the war the scrolls were stored in generally good conditions at warehouses. Over 100,000 Jewish ritual items were shipped from the synagogues and communities of Bohemia and Moravia and for the most part treated respectfully.  In Prague the items were catalogued by Jews, almost all of whom subsequently perished in the Shoah.  When the Communists took over in 1948, they took over all the museum buildings for other purposes, and put the scrolls in a damp warehouse that had formerly been the 16th century Michle synagogue, where they remained under deteriorating conditions until they finally came to London in 1964.

The scrolls are identified by number – hence our scroll is Memorial Scroll Torah #508. It is our great honor to be granted guardian status of one of these scrolls.

When a Memorial Scroll is entrusted to a congregation, on long-term loan, it is with the understanding that the congregation make a long-term commitment to give this Torah a prominent and meaningful role in the spiritual and educational life of the congregation.  This requires that the Rabbi and the leaders of the congregation pledge to dedicate one Shabbat every year to the Jews of their Memorial Scroll – the people, their community, their fate and their heritage.  Each Scroll is a reminder of a martyred community that depends on its new community to ensure that the heritage of the lives of its population is cherished, and that these people are remembered, both as individuals and as a once living and vital community.

Our Memorial Scroll given in trust will remain the property of the Memorial Scrolls Trust in London while it is on long-term loan to our congregation.  It is the policy of the Trust to issue Scrolls only to institutions and not to individuals. It is a condition of the loan that the scroll revert to the Trust in the event that our congregation can no long care for it. The scroll must remain on our property for the full period of our guardianship.  Its insurance, as well as repairs or restoration, are our fiscal responsibility while under our care.  We have paid an initial donation to the Trust as required, and the guardianship status to our congregation at the JCSVV will normally be renewed every five years, as long as we annually verify via inspection and a written report that the Scroll is in good condition and is playing an ongoing, prominent and meaningful part in the religious and educational life of the synagogue.  The inclusion of information about our scroll, as well as the activities of the Memorial Scrolls Trust and the Czech Scrolls Museum on our website, with an active link to www.memorialscrollstrust.org,  the website of the trust, are part of our responsibilities to the trust organization.

Our newly granted guardianship and dedication of the Torah will be celebrated at our Yom Hashoah Shabbat Service on Friday, May 6, 2016, at which time the Certificate of Origin will be hung in the Sanctuary to fulfill the initial conditions of the Trust Agreement.  Our thanks go to Jeffrey Ohrenstein of the Memorial Scrolls Trust for the information about the Scrolls History. Please access this important site for additional information about the work of this important group.

Information about the Memorials Scrolls Trust can be found on their website. 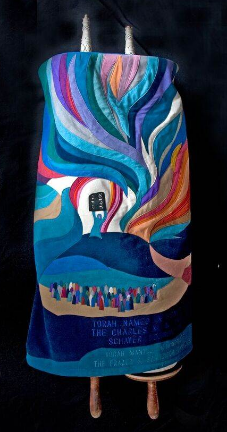 Our largest Torah, it was donated through the efforts of Ruth and Israel Rudoy, the aunt and uncle of our congregant Renee Mendelsohn.  (Ruth is the sister of Renee’s late mother, Libby Kotovsky.)  The Torah is from an orthodox synagogue, Adath Jeshurum, in Monroeville, PA.  Ruth and Israel Rudoy arranged for the Torah’s repair in Pittsburgh, PA.

Upon receipt of the Torah, the Charles M. and Faye G. Schayer Foundation bestowed funds upon the JCSVV for the care of this Torah.

The Torah mantel was embroidered in honor of the Foundation name, as well as in honor of the Frazer and Schneider Families. The mantel design is the Revelation at Sinai, designed and executed by Barbara Ladin Fisher of Atlanta, Georgia.

Our second Torah was donated to the JCSVV by Congregation Emanu-El, in Wichita, KS.  This scroll was originally from Hungary and was scribed sometime prior to the start of WW II.  The donation was facilitated, and the restoration in New York was arranged by Marcia and Herman (Buz) Solomon. The Sofer (Scribe), Neil Yerman completed the Torah restoration and was present for the celebration in which the Congregation was married to the Torah on Shavuot, May 28, 2004.

Upon receipt of the Torah, the Carol and Michael Dean Family donated funds to the JCSVV for care of the Torah and its mantel, while the design of the Tree of Life (the Burning Bush) was designed and executed by Barbara Laden Fisher of Atlanta, Georgia.